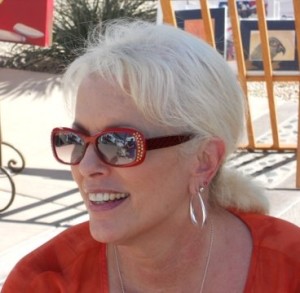 JACQUE LYNN KELLER is an internationally collected fine artist. Throughout her childhood Jacque was a student at the Toledo Museum of Art’s Youth Studies Program. Jacque began painting professionally in the early 1980’s after attending the University of Toledo and Arizona State University’s School of Art. She began as a muralist and specializes in animal eyes, animal portraiture, trompe l’oeil, and commissioned artwork. One of Jacque’s goals is image diversity, ”Each painting has its own lessons for me. I am an explorer of color and form…you will see everything from portraiture to non-representational work. I need diversity in painting as in life. I want the viewer to think, to smile, to enjoy…”

Jacque is a signature member of the International Society of Acrylic Painters. “Nature Watch” was exhibited to great reviews in England. It is now in the slide registry at the Royal Academy of Art, London. In recent years, she has been in numerous international and national exhibitions including those in England, Washington, Louisiana, Florida, Illinois and Arizona including solo and group exhibitions at the Chandler Center for the Arts, Chandler, Arizona. “Mama”, a realistic portrait of her deceased 100-year-old grandmother, was included in a national exhibition in Florida honoring the history of women. She was the winning artist in the national art competition for the Bashas-Chandler Ostrich Festival, Arizona, creating the colorful ostriches in “Where’s the Party?” Her work, Hope, was included in a National War Forum Exhibition in Chicago. “Red Corners” was included in an International Exhibition of ISAP in Seattle, WA. The City of Chandler (AZ) commissioned Jacque to paint three large paintings of their historic downtown; they hang in the city’s Planning & Development Office. Silent Without You and other works by Jacque were used by the Chandler Center for the Arts (AZ) as the cover artwork in their yearly event brochure and playbills. At the request of the Glendale, AZ, Arts Commission, Jacque produced the program cover and invitation art for Glendale (Arizona) Celebrates the Artists; the original is now part of Glendale’s permanent collection. She was part of several shows at Casa Bella Design Center in Park City, Utah. Jacque’s piece Raining Tomatoes was included in the Expressions West Exhibition at the Coos Bay Museum of Art in Oregon.  Survivor–a collaboration with John Gleason and now at home in Oklahoma–won the 1st place award for the NEA’s Call of the Wild show. She also has won Best of Show and First Place Awards for her work with John Gleason, The Guardian. The Guardian is also featured in Northlight Publications coffee table book AcrylicWorks2. In 2020 fashion executive David Hills purchased a large work of Jacque’s which started a conversation about streetwear. At David’s urging and for some painting pleasure, some of her new works are now on new and vintage denim. They can be found online at JacquesClothesline.com or at Quan’tum Art, Inc.—Jacque’s Scottsdale gallery. David and Jacque’s new company Jacque’s Clothesline, LLC, is also representing NBA basketball legends and artists, Tom and Dick Van Arsdale, and their motivational tee shirt collection.

Jacque’s works on wood, canvas, and metal are included in prestigious private, corporate, and public collections, and are eagerly collected and commissioned worldwide.  Her artwork is currently represented by her fine art company Quan’tum Art, Inc. QAI which is located in the renowned art district of Scottsdale, Arizona, USA, and is owned and managed by Jacque and fellow artists John Gleason and Suzanne Larson.